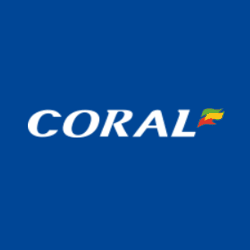 Joe Coral first set up a bookmaking pitch at a racecourse back in 1926. Not long after he teamed up with a mate called Tom Bradbury-Pratt and began to run speedway meetings. In 1943 they opened a credit office in London’s West End, mainly because it was still illegal to run a bookmakers off-course back then. When the new legislation was introduced in 1961 to allow shops on the high-street, Joe Coral was one of the first to react and open one. Ten years later he merged his company with Mark Lane, another bookmaker and four years after that they had re-branded their burgeoning company as Coral Leisure Group.

Coral as a company has enjoyed numerous different mergers and deals over the years, most notably being bought by Bass Plc in 1981. In the mid-1990s the rival bookmaker Ladbrokes made attempts to acquire Coral from Bass and would have succeeded if not for the UK Monopolies and Mergers Commission deciding it wouldn’t be fair. The company was purchased by Eurobet in 1999 and became Coral Eurobet. In 2015 Ladbrokes confirmed that they were back trying to buy Coral and, after the UK Monopolies and Mergers Commission identified some areas where they needed to make changes, succeed with the merger taking place at the end of 2016.

Coral’s site is vaguely reminiscent of a children’s story, with bright blues complimented by yellows and greens to give the impression that the whole thing is clean and tidy. That might sound like I’m damning it with feint praise but that’s not the case, I actually really like it. Being able to clearly see everything that you need to is vitally important when you’re trying to make quick decisions about what bets to place. I also like that the site is quick and responsive to instruction, loading pages as fast as the device that you’re using will allow.

Everything on Coral’s website is laid out well so you can easily buzz from one page to the next. That’s the sort of thing that comes in really handy when you’re trying to place an ante-post bet but also want to keep half an eye on the in-play action taking place at any given moment. Quick Links are common with most of the big bookies now so it’s not surprising to see them offered on the lefthand side of pages, but it’s certainly helpful if, like me, you tend to bet most commonly on the day’s most popular events.

In-Play betting is something I’ve mentioned already, but it’s worth giving it another shout. The feature has completely changed the way that most people bet on things, especially me. Coral’s way of handling it is particularly good for the way I like to bet, so give it a look if you haven’t already. For me, In-Play betting goes hand-in-hand with two other features, Live Streaming and the ability to Cash Out. You can do both with Coral, including the ability to only partially Cash Out your bet if you want to, quite literally, hedge your bets.

It’s becoming quite common for smaller bookmakers to offer coverage of even the most bizarre sport in order to win customers. That’s because the larger bookies, which is a bracket that Coral definitely fits into, doesn’t need to offer odds on something like Warhammer online or a FIFA tournament in order to attract customers. Don’t expect bizarre events to be covered by them, therefore, but be prepared to get coverage of pretty much any mainstream sport you’re likely to want to bet on. Obviously it’s not even close to the same company that Joe Coral opened all those years ago, but doubtless the founder would be proud of the horse racing coverage that they have, for example. 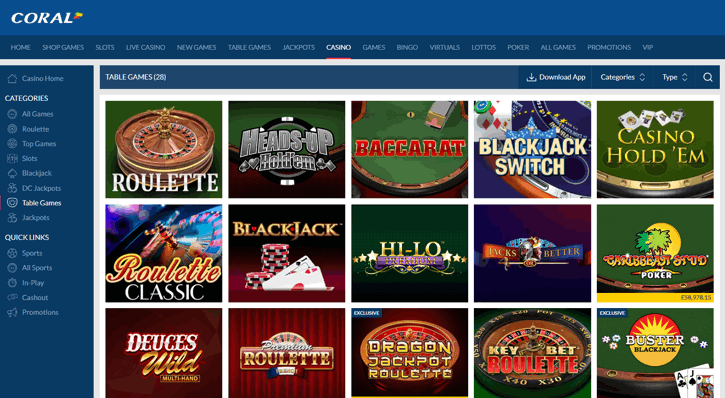 Coral is a massive company in the online betting world and the other products they offer reflect that fact. As well as the likes of virtual sports and an online casino there’s also a live casino, a Vegas style one and plenty of different slot options. If you enjoy your online poker then you won’t be disappointed, plus there’s also bingo and a Lotto style game available. In short, if you’re hoping to find a one-stop shop type bookmaker then Coral will tick all of the boxes you’re after.

With the exception of PayPal, all of the depositing methods available through Coral have a minimum amount of £5. PayPal asks you to put in a minimum of £10, though they join the other methods, such as credit card, debit card and bank transfer, in asking for a minimum withdrawal amount of £5. If you like mixing up your betting between online, via a mobile or in shops then you’ll want to keep your eye out for Coral Connect. You can, for example, bet online before using this method to collect your winnings in a Coral shop. As there are over 1800 of them this shouldn’t be too difficult!

The question of ‘Who Are Coral’ is a complicated one. I won’t repeat myself regarding the various takeovers that the company has undergone over the years, but bearing them in mind will give you some indication of why it’s not easy to explain Coral’s current circumstance. Though Ladbrokes and Coral are run as two entirely separate entities, they are two of the biggest bookmakers around so you need to be aware that they’re now linked. When the officially merged the result was the creation of the biggest bookmaking firm in the United Kingdom and Ireland. Together they boast more than 4000 shops and over 30,000 people work for the company.