First Posted: 1st November 2017 | Last Updated: 5th August 2022
Offer details correct at time of writing but may have changed since - always check the terms yourself before claiming. T&Cs apply, 18+. Please BeGambleAware.org. For help visit Gamstop.co.uk.
Please note: This promotion has expired and is no longer available

Ever since Littlewoods sold entries to their Pools competition outside Old Trafford in 1923, the idea of correctly predicting the outcome of numerous games has appealed to football fans. The Football Pools still exists today, though it is no longer as popular as it was during its heyday.

Instead the likes of multi-leg accumulators have taken over as the most common type of bet for football fans, with companies coming up with all sorts of variations on the same theme to bring in customers. The best way to think about Net Bet’s Golden Goal is as though it’s part big accumulator, part Football Pools. You have the chance to win both a jackpot and a share of the prize pot, if you get your predictions right.

What’s the Promotion About?

Every week NetBet will create several ‘Grids’, each of which will contain a select number of matches. The Premier League Grid will contain all ten fixtures from that weekend’s action, whilst the Europe Grid will feature eleven matches from across the biggest leagues in Europe. There are also two Mini Grids, containing five or six select matches from around the continent. Finally, there’s a Loyalty grid, which is only open to select punters. 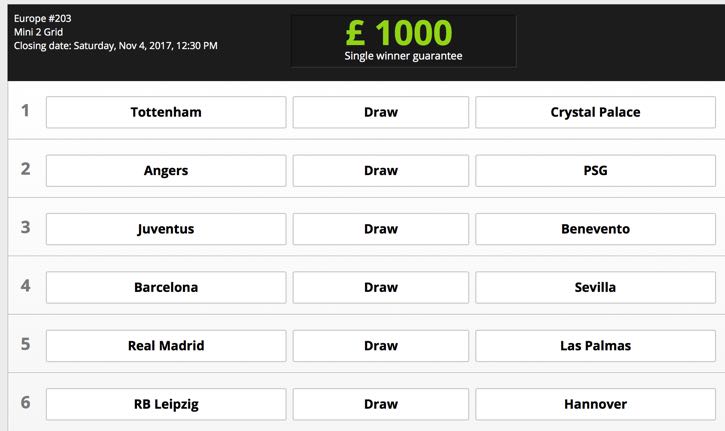 As you might imagine, the jackpot will differ depending on which Grid it is that you’re betting on and the jackpots are progressive. Each one has a limit to the size that the jackpot can grow to. Here are the starting amounts for each Grid, as well as the number of fixtures and limit the jackpot cannot exceed:

How Does It Work?

In order to play the Golden Goal game, you need to predict the outcome of the amount of matches within each Grid. You click on the result you think will happen, choosing between a home win, a draw or an away win – just as you would with a normal match outcome bet. Once you’ve clicked on your selection it will turn green and your Grid will look something like this:

It will cost you £1 for each Grid that you choose to play, though you can pay more than that if you’d like to make additional selections. You can choose to play a number of doubles or trebles by selecting an extra option or two.

For example, if you want to select both a home win and an away win in the same game, this will count as a double and cost you an extra £1. If you’re really not sure which way the game is going to go then you can opt to select all three potential outcomes, which would be a treble and cost an extra £2. 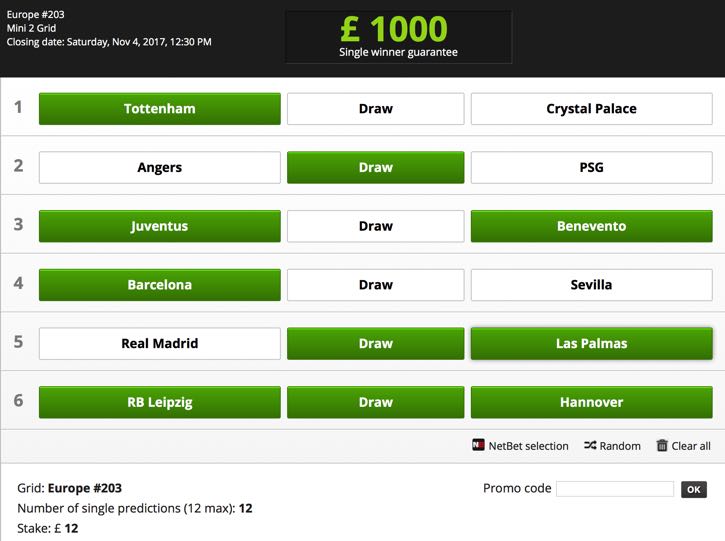 The number of doubles and trebles you can play is different for each game. I’m not going to explain it for each one, but when you come to play the game you can have a look at the terms & conditions on the NetBet site and that explains it very clearly. Obviously the more singles and doubles you play the more chance you have of winning, but the more it will cost you to play.

What Can You Win?

To add to the excitement of the game, NetBet have decided to offer a different amount of prize money depending on how many selections you guess correctly. Here’s the breakdown for each of the different Grids:

There are other terms and conditions that come into play depending on how many winners there are. For example, if there are no winners of the top level then 20% of the total is put into the following Grid, which is where the jackpot limit comes into play. If there are several winners of Live 1 prizes then the follow up Level’s prize is considered to be null and void. Again, though, I’m not going to run through every variation here.

As always with an offer like this, the key question becomes ‘is it worth it?’ The answer really depends on how risky you normally are with your accumulator predictions. For example, here’s a comparison of the price NetBet would given you for an accumulator on the same matches as in each Grid, alongside the possible winnings through the Golden Goal promotion, before you take into account the percentage of the pot added to the jackpot:

In the above examples, I’ve opted for a mixture of choosing the favourites and mixing it up by choosing a draw or a shock result. It’s also worth noting that all of the winnings include an accumulator bonus boost that NetBet applies to large accas, so it’s not an entirely fair comparison.

Even so, it’s clear that certain Grids offer better value for money than others. The straight accumulator on the eleven European fixtures would offer you nearly double the prize money when compared to the NetBet Golden Goal promotion. The Mini 2 Grid, however, represents a significantly better amount of money in winnings than with a six-fold accumulator.

If you generally tend to play it safe when it comes to your guesses on an acca then I’d suggest that the Golden Goal game is well worth looking at. You can happily pick all of the most likely outcomes in each match, safe in the knowledge that the likely winnings won’t change as much as with an accumulator. If, on the other hand, you tend to think outside the box then you’ll undoubtably get better value for money playing your own acca than NetBet’s Golden Goal.

Personally, I check in on the Golden Goal game each week to see where it’s at. If it’s been a rollover week and the jackpot on one of the Grids has increased accordingly, I chuck £1 on it to try my luck. The fact that prizes are dished out to selections that hit slightly less than the full whack also means that Golden Goal is like taking out your very own Acca Insurance, just with a bigger prize at the end.