When it comes to the new breed of bookmakers that have been making headway in the industry ever since the launch of online gaming, they tend to fall into two different categories. Some of them got straight into the world of fixed odds betting, getting a sportsbook up and running as soon as they could because they wanted to build up a sports-specific audience. The other category is filled with companies that started off by opening an online casino, saving the launch of their sportsbook until they felt that they really understood the industry and had gained a decent reputation for what they offer.

LeoVegas, as the company’s name suggests, very much fit into the latter group. The Swedish company, founded by Gustaf Hagman and Robin Ramm-Ericson in 2011, originally wanted to become the biggest and best mobile casino in the world. A bold aim, perhaps, but they weren’t over-awed by a competitive industry and gave it a good go. Having established the company over the following few years, Hagman and Ramm-Ericson decided to launch a sportsbook ahead of the UEFA European Championships in 2016. LeoVegas Sport has gone from strength-to-strength since then, continuing to target a mobile audience first and foremost.

One thing that should be pointed out first and foremost here is that LeoVegas have targeted a mobile audience from the moment that the company was formed. Because of that, it’s entirely fair to say that their website doesn’t look as top-notch as some of their competitor’s sites might when viewed on a desktop computer. Having said that, I actually quite like using it. Always a fan of sites that don’t chuck too much information at you in the same space, I find that LeoVegas’s stripped back approach works well for me. It’s basically the mobile site, which is great, supplemented by two large graphic blocks either side to fill up space on your desktop’s screen.

The colour scheme of white, beige, black and orange isn’t exactly the most exciting on the internet, but it ensures that everything is nice and clean and easily navigated. This is the online bookmaking equivalent of nouveau cuisine, with a strip along the top of the screen taking you where you need to go. In the central section of the main page, you’ll find a search bar for teams, sports and events sitting on top of two strips, Live Events on one side and Top Events within the next 48 hours on the other. That’s pretty much it. No overly gregarious adverts on the side, no lists of sports or reams of information; just a nice pared back site with a ‘show all’ tab at the top to transport you to the list of sports they cover. I love it.

For what is essentially a reasonably small company in the grand scheme of online betting, LeoVegas have a number of decent features that you’ll want to take advantage of. For starters, fans of greyhound racing will be pleased to know that they can watch the races that they’ve placed a bet on. It’s the only sport that’s Live Streamed, but that’s a step in the right direction. As you’ll have picked up on from my introduction, LeoVegas offer customers the chance to bet In-Play. Their set-up is much nicer than some other sites, if for no other reason than you don’t need to have Flash Player installed to use it. They also separate their sports into collapsible menus, making it easier to find what you want to bet on.

Speaking of what you might want to bet on, LeoVegas’s list of sports is surprisingly long when you consider that they’re quite new to the business. As well as options such as football, tennis, horse racing and greyhound racing, they also offer odds on slightly more left-field events. These include things like handball, pesapallo, trotting and futsal. You also have the opportunity to bet on e-sports, political events and TV or show-business moments. 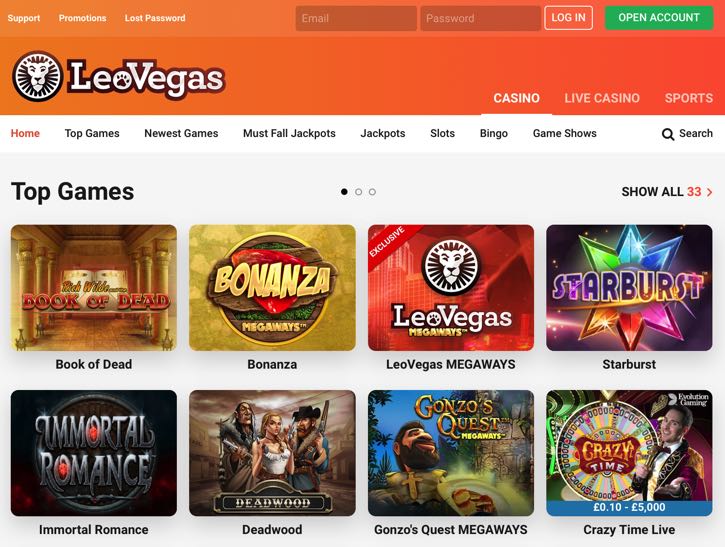 If you’ve been paying any attention whatsoever then you’ll know that LeoVegas began life as an online casino. They have not abandoned that project just because they’ve since launched a sportsbook. In fact, the company has expanded what they offer, continuing to have a regular online casino but supplementing it with a live casino that promises all of your favourite card games but with real life dealers.

The normal casino is dominated by slots, instant wins and mega-jackpots, but there are still 56 different table games to keep you entertained. That includes the likes of three-card brag, blackjack variations and baccarat. In other words, if you’re a fan of playing casino games of any type then you’re going to be fine.

The minimum amount that you’ll be able to pay into your LeoVegas account at any one time is £10. When it comes to the methods available to you for doing just that, you can opt for obvious methods like bank transfer, Visa and Mastercard. If you tend to think outside the box a little bit then you’ll want to turn NETeller, paysafecard, Sofort or Trustly. When it comes to taking money out of your account you’ll need to start at £20 at least and work your way up from there. You can withdraw up to £4000 per day or £20,000 per month if you’re wondering.

Unlike a lot of online gaming companies that actually come under the wider umbrella of a larger organisation, LeoVegas is owned and operated by LeoVegas Gaming Limited. They are based in Malta, from where they have UK Gambling Commission Licence, though the company’s headquarters remain in Stockholm. As recently as 2017 the company won the Online Casino Operator of the Year award at the International Gaming Awards.