Betsafe is part of the Betsson Group, which is a company from Sweden that owns numerous different online betting companies throughout Europe. The site itself was launched back in 2006 and has worked hard over the past decade or so to garner a reputation as one of the industry’s most trusted names when it comes to the newer sites. With over 450,000 customers based across more than one hundred different countries, it’s entirely fair to say that betsafe is one of the most cosmopolitan bookmakers out there.

As is often the case with a relatively new bookie, Betsafe decided to establish their name with one of the biggest markets in English betting by teaming up with a Premier League club. That club was Manchester City, who Betsafe became the official betting partner of. They also made a deal to be the same thing for the Rugby Union club Saracens. As if that wasn’t enough, they brought in the former Tottenham Hotspur manager turned professional pundit, Harry Redknapp, to give betting tips and further their reputation in the UK. 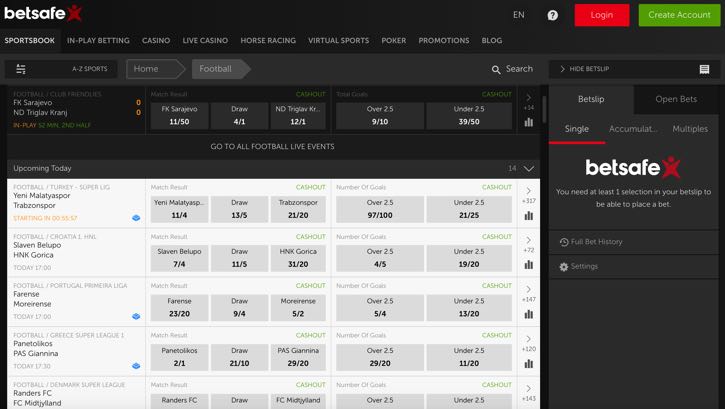 The Betsafe site actually looks quite cool, with blacks, greys, white and reds being the predominant colour used in the colour scheme. This gives it a somewhat futuristic look and keeps the whole thing nice and uncluttered. The only real bits that might distract are an occasional advert at the top and on the right of the sportsbook homepage. Along the top you’ll find links to the likes of promotions or popular markets, such as the Premier League, whilst down the side you’ll find every sport the company covers listed.

The only thing about the site I’m not a massive fan of is that clicking on a sport on the left doesn’t take you to a page dedicated to said sport. Instead, it opens up a series of menus that you then need to click through before you get where you’re going. Say you’ve clicked on football, you’ll find a dropdown menu listing every single country covered. Clicking on England then brings up all of the leagues and competitions and you’ll only find the matches once you’ve selected the likes of the Championship or FA Cup. Having said that, I can’t complain about the speed of the site, which responds quickly to requests.

There’s a decent enough In-Play market on the Betsafe website, which isn’t saying much but is still important. It’s hardly market leading, yet if it didn’t exist then it would almost certainly lose the company business. You will be pleased to know that you can Cash Out certain bets, though you can’t opt for a Partial Cash Out as with some of the bigger companies. After that I have to say the rest of Betsafe’s features are a little bit disappointing. There’s no Live Streaming, for example, which I never believe is a deal breaker but that some people might be frustrated by. All in all, I would say that Betsafe’s available features are standard rather than exceptional.

If the features aren’t exactly anything to write home about then the sports covered at least make up for it. As well as offering odds on all of the mainstream sports, Betsafe also cover much lesser-known ones. We’re talking about the likes of bandy, floorball, trotting and handball. You can also bet on current affairs, such as politics, business events and big TV moments.

Obviously it’s the big sports that they offer the best coverage of and I’m able to place over 20,000 bets on football alone at the time of writing. They key thing about Betsafe is that they’re adding new sports all of the time, with horse racing being added to the roster quite recently. 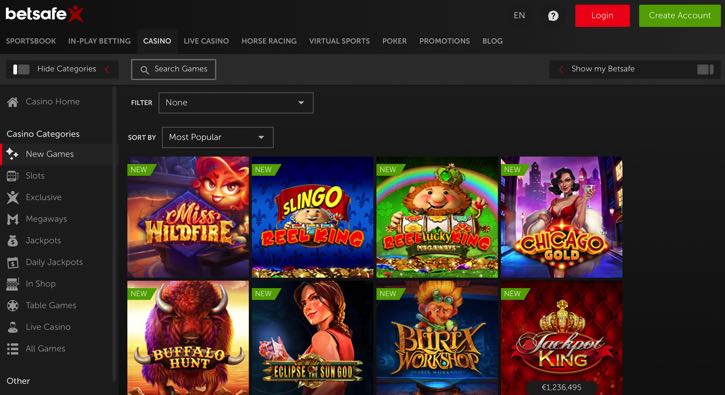 I’d be lying if I said that there was a limitless amount of additional products offered by Betsafe, but there’s certainly more than just a sportsbook. If you’re someone that enjoys playing poker online, for example, then you’re in luck as that’s something they do offer.

There’s also both a standard online casino, with the normal computerised versions of all of your favourite table games, as well as a live casino. That lets you see real dealers shuffle real cards and place them on real tables, or spin a real ball around a real roulette wheel. If that’s not for you then you might want to explore the virtual sports that Betsafe offer.

From Visa to Mastercard, Entropay to NETeller, there are a whole host of options available to you when it comes to paying money into your Betsafe account. All of them, including bank transfers and PayPal payments, require a minimum amount of £10 be paid into your account.

There are definitely more payment options available through some of the bigger bookies out there, but if we’re being honest you don’t need more than a couple. When it comes to withdrawing your winnings you simply need to have a minimum amount of £20 that you want to take out.

As I mentioned at the start, Betsafe is part of the Betsson Group of online bookmakers, based in Sweden. The bookmaker itself operates out of Malta for tax reasons. The Betsson Group’s origins actually date back to 1963 when Bill Lindwall and Rolf Lundström founded a company called AB Restaurang Rouletter. The purpose of the new business was to supply slot machines and such like to restaurants in Sweden.

Over the years, the company grew and grew, with a particular development happening once the online gaming industry particularly took off. Amongst numerous other things is an interest in Net Entertainment, one of the foremost online gaming solution companies in the industry.