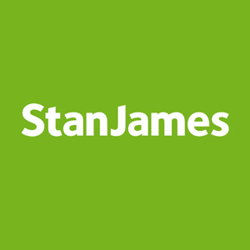 There’s something about Stan James that I find really reassuring. Perhaps it’s because they’ve got a ‘classical’ look to them as far as bookmakers are concerned, reminding me of the sort of shop I’d see my dad disappear into when I was a kid. Whatever the reason I have to confess at the start of this review that I’ve always had a soft spot for them. I’ll still be as objective as possible, of course, but if there are moments when the review seems to be filled with a nostalgia for years gone by then that might well explain why!

Founded by Steve Fisher and James Holder back in 1973, Stan James was bought by the Kindred Group in 2015. That means it’s now part of the same family as other online bookmakers like Unibet and 32Red. Weirdly, the purchase didn’t include the acquisition of Stan James’s high street shops, which were instead re-branded with the name Megabet. If you also recognise the Stan James name then it’s no great surprise, they’ve been involved in a number of sponsorship deals over the years. For a decade from the turn of the millennium, for example, the company was the principle sponsor of World Matchplay darts. 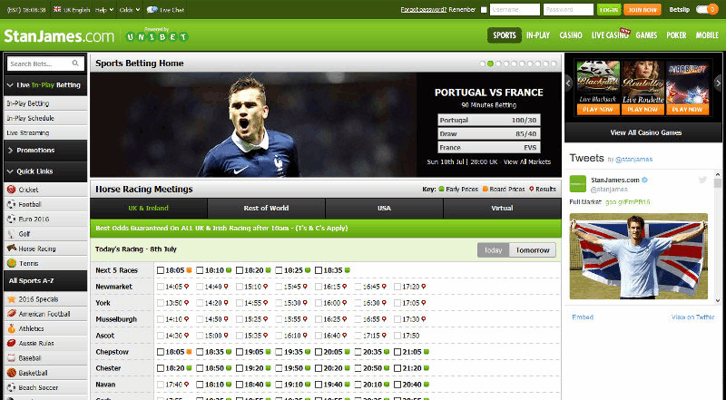 The best thing I can say about Stan James’s website is that it isn’t offensive. That isn’t me damning it with faint praise, either. There are countless bookmakers out there who think that the best way to draw attention to their site is by having ostentatious colours, countless graphics and by trying to fit everything that they can onto their homepage. Stan James have avoided that route, keeping things nice and under-stated and opting for a colour scheme that is mostly white and black, though there’s still some green at the top of the page to remind who whose site it is. That might all sound a bit churlish, but believe me when I say that when you’re trying to place a bet under a time constraint the worst thing that can happen is an inability to read what’s on the page.

The site itself is pleasantly pared back, with a scrolling advert at the top telling you all of the latest offers that you might be interested in. Quick links to In-Play bets run down the lefthand side, whilst the righthand side is also given over to information about promotions and offers. The main section has details about whatever the most interesting markets are at the time that you’re on the page. For example, if the group stage of the Champions League is about to get underway then you’ll see the big matches in the centre of the homepage of the sportsbook, or if there’s nothing of interest then expect to see other In-Play betting options. My only complaint is that parts of the site require Flash, which can be a bit of a pain if you don’t have it. It’s generally fast and responsive to instruction, however.

The Live Streaming available via the Stan James site is limited to horse racing, but that’s still more than some sites offer so it shouldn’t be sniffed at. The In-Play betting section is the main part of the site that needs Flash installed, but it’s one of my favourites to use when I’m looking to bet on numerous events at the same time. There’s something about the way that things are laid out that makes sense to my brain, so I like it. You can also listen to live commentary on horse racing, greyhound racing and cricket matches, should you wish to.

Stan James’s list of sports isn’t what you’d call comprehensive, but there are a fair few sports on there that not every bookmaker covers. Yes the most popular sports like football, horse and greyhound racing and tennis are all offered, but what about the fact that they cover bowls? Hurling, rowing and ten pin bowling are also on their list of sporting events covered, which means that they are broader in their coverage than plenty of higher profile bookies.

As with most top bookmakers nowadays, Stan James offers its customers the opportunity to play poker through their site. You can also play slot games, if that’s something that you enjoy doing, and there’s also a casino. That’s actually understating it somewhat now I think about it, given that there’s both a normal casino and also a live one.

The former will see computerised versions of normal casino games in operation, whilst the latter will allow you to play some games courtesy of a live deal or croupier. Finally, if you’re a fan of the bingo then you can now play that at Stan James, too.

Credit and debit cards have a minimum deposit amount of £5 and a minimum withdrawal of £10. The same is true of NETeller, Skrill and PayPal deposits and withdrawals, which makes things nice and simple. When it comes to paysafecards you can choose to deposit £10, £25, £50 or £75, with withdrawals being a minimum of £100 and going straight into your bank account. That is also the same withdrawal requirement for those of you that like to do everything by bank transfer, just to let you know.

Who Are Stan James?

Given that the two people who created the company were called Steve Fisher and James Holder, you might well wonder where the name Stan James came from. Interestingly, the Stan was made up of the first two letters of Steve’s name as well as the first two of his wife Anne, with James giving his name in its entirety.

Today the company is almost entirely different from what it was back in 1973, with the acquisition of it by the Kindred Group meaning it’s now part of a larger online gaming family. As well as Stan James the Kindred Group also owns 32Red, from whom Stan James had bought Betdirect in 2007. Everything comes back round.