The explosion of the internet has brought many things; the ability to communicate in real time with people on the other side of the world, for example, or funny videos of cats playing the piano. When it comes to betting it has done something far more interesting: completely changed the way the industry works. As recently as 1960 it was illegal to offer odds on sporting events outside of racecourses. There weren’t any shops on the high street in the way that there are now. Back then people didn’t even know what a mobile phone was, let alone would they have been able to place a bet on one. Even once the laws were relaxed, the only bookmakers were the likes of William Hill and Ladbrokes; names that are now considered to be ‘household’.

As soon as companies were allowed to operate on the world wide web, things began to change rapidly. Betting companies sprang up all over the place, giving punters the opportunity to have a flutter in the comfort of their own living room. No longer were the tried and tested bookmakers the only ones that bettors could turn to, with newer offerings gaining a genuine foothold in the market. You might wonder why I’m telling you all this. The answer is that this information is important if you want to understand the success of companies like 138bet. They seemingly came out of nowhere but they soon gained a reputation for offering odds and services that made the more traditional bookies seem old-hat. Here I’ll tell you more about them. 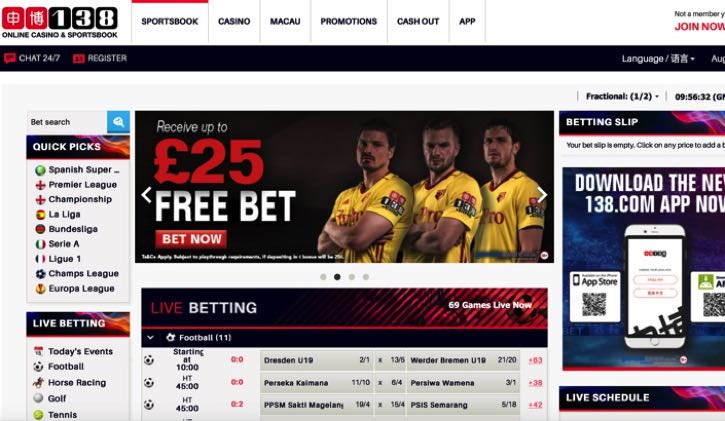 There is something quite pleasant about using the 138bet site. Perhaps it’s the white background with black writing that the company has opted for as it’s colour scheme, with most bookmakers shying away from such plain colours. In my opinion it offers a clean look, making the occasional colours splashed on offers and so on stand out a bit more. You get your usual offering of live events that are taking place there and then dominating the centre of the sportsbook homepage, plus your betting slip and a schedule of upcoming events over on the righthand side of the page. There’s also the list of all sports covered over on the lefthand side that’s become pretty standard, too.

In many ways, then, 138bet don’t offer anything that isn’t fairly common with most mainstream bookies, yet I do find using their site a refreshing experience. Perhaps it’s their list of ‘Quick Picks’ over on the lefthand side of the page that I quite like, saving me the bother of having to scroll down the page to jump to my beloved Premier League football betting section. Maybe it’s the search function that lets me find the horse I know I’m going to bet on nice and quickly. It could even be the fact that the page responds nice and quickly to me clicking links, loading pages reassuringly fast. Whatever it is, I’m a fan so I suggest that you give a look over when you get a chance.

When I was talking in the intro about the way in which betting online has changed the world of bookmaking, I could also have talked about how In-Play betting has equally revolutionised the world of online betting. Sufficed to say, 138bet have taken this to heart and their live betting system is a joy to use.

They’ve supplemented it with the Cash Out feature, meaning that if the market shifts dramatically because of events on the field of play then you can at least salvage some of your bet before it’s too late. No Live Streaming to speak of, but that’s not something I’m ever bothered by.

138bet appear to list their sports according to favourability, so it’s not a shock to see football right at the top of the pile. Tennis, golf and horse racing are also up there, which is indicative of how much the company is keen to appeal to a British market. Mainstream sports aside, there are also some slightly more unusual offerings. These include handball, floorball and Gaelic football. Hardly the sorts of things that you can’t bet on anywhere else, but interesting nevertheless.

138bet is the sportsbook arm of 138.com, a company that began life offering casino-style betting operations to the Asian market. Naturally, they have not strayed too far from their roots, offering customers both a Macau-themed slot area as well as a computerised casino. At the time of writing, they don’t have a live casino you can bet through, but I wouldn’t be shocked if that was something that they added at a later date.

138.com is a global organisation, so 138bet takes advantage of the machinations already in place for their customers. Consequently you can deposit money into your account with all of the usual methods, including debit cards and e-wallets like NETeller and Skrill.

The more traditional of those methods have a withdrawal limit of £5000 per day with a minimum amount of £10, whilst the newer options ask you to take out at least £20 but allow up to £10,000 to go out of your account on a daily basis.

Launched as 138SunGame, the company rebranded as 138bet and have been based on the Isle of Man since 2012. They come under the umbrella of the parent company Fesuge Limited. Obviously you don’t need to worry about such minor details, but it’s always worth bearing in mind should you need to contact them for any reason.

They’ve got a UK Gambling Commission Licence, so your money is safe as safe can be, and they’ve also been a principal betting partner of Watford FC in the past, lending them some genuine credibility.