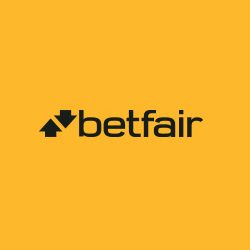 Betfair was formed by Andrew Black and Edward Wray in 2000. It began life as a Betting Exchange, allowing customers to bet against each other and there take on the role of the bookie, rather than having to take whatever odds the bookmaker offered. It quickly became the biggest betting exchange in the world, being valued at £1.5 billion by 2006. The actual sportsbook side of the operation, which is what I’m most interesting in to be honest, launched in May of 2012.

As with any successful business, sooner or later another one comes about to try to take it over. So it proved with Betfair and in 2015 it was revealed that Paddy Power were looking to merge with the company and that went ahead in 2016. The new company is known as Paddy Power Betfair, though the two bookmakers are ran as separate businesses. You don’t need to worry if you’ve got an account with Paddy Power, therefore, as you’ll still be classed as a new Betfair customer. 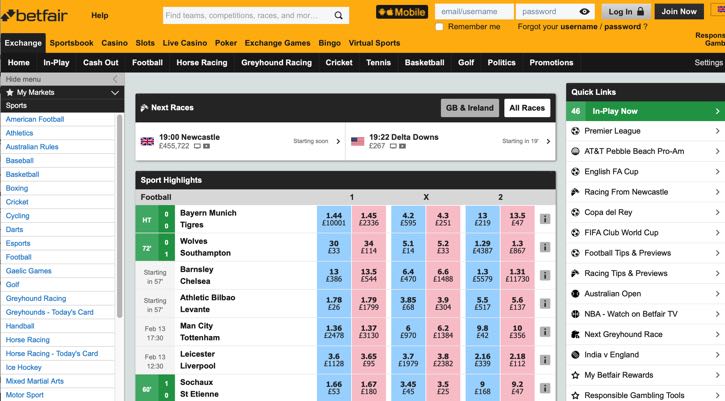 I’ll mention this shortly in a bit more detail, but the most important thing about the Exchange is the ability for things to move quickly. The market reacts to events in a matter of milliseconds, so it’s hardly surprising that the Betfair website does so as well. You don’t have to worry about waiting for a page to load or about information not being up-to-date; it’s as close to real time as it’s possible for a betting company to be. This is proven by the fact that you’ll find a clock ticking down the seconds to the start of the next big race, which is the sort of function a bookie simply wouldn’t offer if they couldn’t get it right.

You’ll also find that you can watch the odds offered on your Cash Out change dramatically as the event is going on. I’m someone to whom that sort of thing matters, mainly because I hate it when I’m trying to place a time-sensitive wager and the site I’m on doesn’t respond quickly enough. I also don’t like it when the colours used in the design of the site make it difficult to read stuff, but Betfair have avoided this by sticking with black and white for the important information and keeping the rest of the site uncluttered. There are ‘Quick Links’ at the top of the lefthand side of the page, which is just as well as it can be slightly difficult to navigate the site otherwise.

Betfair’s biggest pull is unquestionably the Exchange. If you’ve never used one then don’t worry, it’s not hard to figure out how it all works and if you’re still not keen then you don’t have to use it anyway. There’s a decent amount of Live Streaming available, but the other main thing that you’ll want to make use of is the company’s excellent In-Play betting market.

The Exchange really comes into its own when you’re betting on live events, so it’s no surprise that the sportsbook has taken advantage of this to have a brilliant set of In-Play options. The whole system is set up to ensure that movements in the market can be capitalised on, which is why the Cash Out function, including Partial Cash Out, is top-notch.

Unlike most bookmakers, who opt for a list of sports covered down the lefthand side of the sportsbook homepage, Betfair hide their sports away in a tab in the upper left part of the screen. Click it and you’ll see a list that doesn’t really contain any surprised, with most of the mainstream sports you’d expect to find. We’re talking about the likes of golf, football, tennis, greyhound and horse racing and rugby.

There are also slightly newer offerings such as mixed martial arts, handball and e-sports. It’s not exactly a comprehensive list, but you’re unlikely to be disappointed provided you don’t tend to stray from the path when it comes to your betting choices.

When it comes to offerings apart from the sportsbook, Betfair is one of the best bookies out there. Obviously the Exchange is entirely different way of betting, but there’s also both a standard online casino and an a live one to choose from. On top of that, there are popular slot games and both a Vegas and Macau-style slot room. Chuck in poker, bingo, football jackpots and an arcade and you’d be hard pushed to find a bookmaker that offers you more.

One of the chief benefits of the merger between Paddy Power and Betfair is the ability to go into a Paddy Power high street shop and deposit money to, or withdraw money from, your Betfair account. All you need to do is make sure that you’ve got your username and a photo ID with you. Bizarrely, for such a large company, Betfair don’t make it easy to discover their minimum and maximum amounts for deposits and withdrawals. Even a visit to Live Chat didn’t enlighten me.

Paddy Power Betfair is based in Dublin and came into being in 2016 when the former bookmaking firm acquired the latter to create a merger. The business itself is made up by 52% of it going to Paddy Power’s shareholders and the other 48% belonging to shareholders of Betfair. Also coming under the umbrella of the brand is Timeform, the sports data and content that was founded in 1948, bought by Betfair in 2006 and moved over with them when the merger happened.