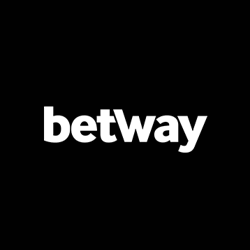 In many ways, Betway are something of a ‘new boy’ in the school of of online betting companies. Formed in 2006, they’ve worked hard over the past decade or so to cultivate a reputation as a really reliable bookie, with sponsorship one of the best weapons in their arsenal. They kicked things off in a big way back in 2014 by sponsoring some really high profile sporting events, including the fight between Carl Froch and George Groves at Wembley. In the same year, they also took on sponsorship of the Cheltenham Festival’s Queen Mother Champion Chase.

That’s why you’ll have heard of them if you’re a fan of boxing of horse racing, but the name will likely also ring a bell if you’re a football supporter. That’s because they became the principal sponsor of West Ham in 2015, including having their name on the front of the Premier League club’s shirt as well as large amounts of sponsorship inside the Hammers’s new stadium. That might not be noteworthy in and of itself, except for the fact that West Ham have moved to the Olympic Stadium, where the opening and closing ceremony, as well as numerous events took place when London hosted the Olympic Games in 2012. 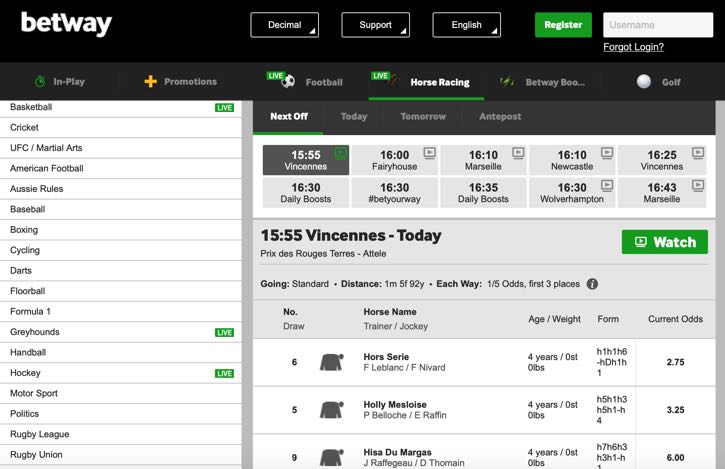 If you’ve read any of my other reviews on this site then you’ll know that I’m a fan of clean and clear websites. I don’t like clutter and I find it extremely distracting to have to wade through massive advertising or try to decipher a poor colour scheme when you’re looking to place a bet. Thankfully, Betway seem to think the same sort of thing as they opted for a clutter-free experience with a colour scheme of black, white and green. That means you don’t have to squint when you’re looking at the screen, instead just finding what you need nice and easily. That is aided by a series of ‘Quick Links’ at the top of the lefthand side of the sportsbook homepage, taking you straight to the most popular bets of the day.

There’s also a handy link to all of the sports that Betway cover, meaning you don’t have to go searching for whatever it is that you want to bet on. My only slight complaint is that there is an advert for Betway’s ‘Free Bet Club’ at the top of every sport section that you click on; though some people won’t mind that as it is a good offer. More important is the fact that site responds quickly to requests, meaning you don’t have to wait for ever for pages to load. Handy if you like to bet In-Play.

Speaking of which, Betway’s In-Play is actually one of my favourites. That’s mainly because they don’t ram it down your throat like some companies, instead having a small ‘In-Play’ link at the top of the sportsbook homepage and displaying a green ‘Live’ badge next to any sports that have ongoing fixtures at the time that you’re looking.

If you’re an In-Play betting fan then you’ll probably also like to Cash Out your bets from time to time and Betway will let you do just that. In fact they’ll go one step further, giving you the option to only Partially Cash Out your wager. There’s also some Live Streaming available, denoted by a TV symbol next to the event you want to watch.

Betway’s rise to the upper echelons of the online betting world has been a rapid one, but that doesn’t mean that they haven’t ensured excellent coverage along the way. As you’d expect from a company that sponsors a football team, prominent rose racing and events like boxing and darts, their coverage of the more mainstream sports is top-notch. They also offer slightly weirder sports, such as pesapallo, for those of you that enjoy a flutter on the slightly bizarre.

The Betway brand is more than just a sportsbook. On top of that, there’s also a casino and a live casino, meaning you’ve got the option of either a computerised version of your favourite table games or a live video broadcast. There’s also Betway Vegas, which is a Las Vegas-style room filled with all of the best slot games and given a nice bit of Betway branding. Betway Poker and Betway Bingo do exactly what they say on the tin, giving the impression of a company that wants to offer you every type of online gaming you could hope for.

Whether you’re talking about Betway Casino, Betway Poker or simply Betway’s sportsbook, all of them come under the larger umbrella of The Betway Group. It’s intriguing to see a private company as the owners and operators of an online bookmakers, so common is it for the largest and most successful ones to be part of something much bigger. Based in both Malta and Guernsey but also having offices in the likes of South Africa and London, the Betway Group protects the interests of professional sports personalities by working in partnership with the Professional Players Federation.