In 2013, three men, named Marcus Brennan, Richard Brennan and the wonderfully Irish sounding Tadhg O’Toole, decided to create a new online betting company that would take a different path to most other online bookmakers. Instead of paying other people to develop the systems and platforms that would provide punters with somewhere to place their bets, the Irishmen would firstly develop and then operate everything on their own. Not only did their idea work, but by 2014 they were able to collaborate with The Mirror newspaper’s ‘Punter’s Club’ in order to further their reputation and gain more customers. It wasn’t just their unique method of refusing the help of external companies that got BetBright’s name into the mind’s of regular punters.

In 2015 they announced a sponsorship deal with Cheltenham Racecourse that would see their name attached to numerous races, including the BetBright cup during the Festival. That is the much loved competition between horse trained in England and those trained in Ireland, with BetBright paying £10,000 to the Injured Jockeys fund of the winning country from 2016 onwards. They continue their self-promotion courtesy of a sponsorship deal with the BAMMA Mixed Martial Arts event in Dublin in 2017. They also gained themselves some sporting endorsements, of a sort, when Jimmy Bullard became a football ambassador ahead of the 2016-2017 season, Nick Luck became a horse racing pundit and both Hector Ó hEochagáin and Phil Tufnell became brand ambassadors. 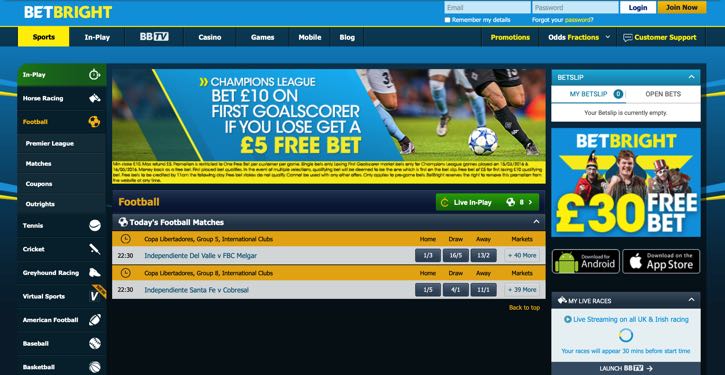 I review a lot of sportsbook websites. You’ll know that if you’ve had a look elsewhere on this site. I enjoy it and it’s always fun, but it can be a little repetitive when the various bookmakers appear to be using different skins on virtually the same platform. It’s an absolutely pleasure, therefore, every time I load up BetBright’s site and see something a bit different from the regular. Don’t get me wrong, it isn’t radically different. You’re not going to look at it and wonder what sort of site it is. But it’s different enough to mean that it will feel like a slightly refreshing experience to one you might endure with a better-known bookie. You’ll find that as soon as you load up the homepage, seeing a section labelled ‘Recall’, which analyses the previous bets you’ve placed and offers similar ones for upcoming events that the site thinks you might be interested in placing. Really clever stuff.

There’s also the fact that, unlike a lot of mainstream bookmakers, BetBright don’t feel the need to ram their In-Play betting system down your throat. Instead you’ll see a list of the next three horse races that will be getting underway, plus some of the bigger football matches that punters may want to bet on. You’ll still find a list of sports covered down the lefthand side of the page, along with things such as links to their casino along the top. Everything just feels a bit different, a bit better. The page is full of colour without it being distracting and different sections of the site load quickly and painlessly. For me, it’s one of the best of the new breed of betting sites on the market.

Given the relative youth of BetBright, it’s quite surprising just how many of the standard features that they offer. You can Live Stream horse racing, for example, provided you’re logged into your account and have bet at least £1 on the race you want to watch. Greyhound racing can also be streamed, with the feature labelled BBTV. In-Play betting is an important part of any self-respecting bookmaker, with BetBright’s system being as good as any of them. They’ve also implemented a Cash Out system and will be adding a Partial Cash Out in the near future.

It would be untrue to suggest that BetBright’s sportsbook is extensive when it comes to the sports you can bet on, but all of the big ones are in there. I’ve already mentioned greyhound and horse racing and you won’t be surprised to learn that a UK-facing company has decent football coverage, too.

Some US sports like baseball, American football and ice hockey also make the grade. If you would put your betting tendencies into the ‘mainstream’ category rather than ‘unusual’ then you’ll be fine. I must admit, however, that the limited number of sports covered is the company’s one let-down as far as I’m concerned.

Though BetBright have begun to work with external companies in recent years, most notably their 2015 collaboration with Betradar so that they could offer virtual games, they have been running their own casino platform since its launch in 2014.

A casino, a live casino alternative and a slot machine section are all available to customers, as are mobile versions of those same things. It’s not quite a one-stop-shop just yet, but it’s heading in that direction.

BetBright is owned and operated by the parent company Dedsert (Ireland) Limited. The sportsbook was founded in Dublin in 2013 and they have a licence issued by the UK Gambling Commission. The company has grown at an impressive rate, being awarded the Best In-House Product Award in 2016 at the EGR Operator Awards. In 2017 they brought in Sarne Lightman, who had won plaudits for their work as the director of Poker Stars, to take over as the Managing Director of the sportsbook and casino.