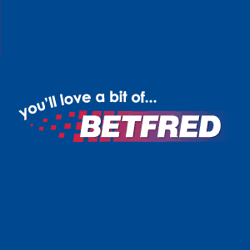 Set up in Salford, Greater Manchester by two brothers named Fred and Peter Done, Betfred is a bookmaker that has made its name as a company by being controversial from time to time. Often when someone says a company is ‘controversial’ that means that they’ve done something to let their customers down, whereas with Betfred the opposite is actually true. I use ‘controversial’ to mean that the company did something that raised eyebrows; namely that they paid out early on bets that ended up losing.

The Dones are Manchester United supporters and in 1998 they paid out on bets on the Red Devils winning the Premier League only for Arsenal to beat them to the title by a single point. Not content with doing it once, the Dones repeated the trick in 2012, the season when Manchester City won their first title of the Premier League after Sergio Aguero scored a last minute winner. Whatever the rights and wrongs of Betfred’s decision to pay out earlier than expected, it gained the company some excellent publicity and a sentence in the bookmaking history books. Betfred also once owned the Tote, having bought it for £265 million in 2011, but of course now has since been sold on. 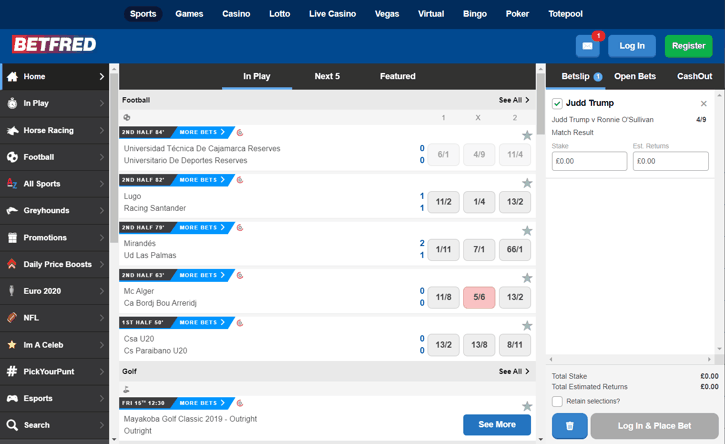 There are rumours that Everton’s one-time chairman Bill Kenwright banned the colour red from his offices and even had blue lights on his Christmas trees. Given that football regularly has such displays of outrageous partisanship, you would be forgiven for expecting to see nothing but red and black on the website of a company formed by Manchester United fans. Thankfully, they realised that that would be ridiculous and instead opted for deep blues and white, which might not seem that important but you’ll have to trust me that a poor colour scheme makes a bookie’s website a nightmare to use.

I often mention the colours chosen by a bookmaker for their site because I honestly do think it’s important, but even I’ll admit it’s not as crucial as how the site responds to instruction. There’s nothing worse than wanting to place a bet when there’s a bit of a deadline and having to wait forever for pages to load up. The good news is that that’s not something you’ll have to worry about when using Betfred’s site. In fact, pretty much my only criticism of it is that you have to go through several different menus when trying to see a list of sporting events that are coming up soon. I regularly use the Quick Links option to avoid this issue.

I’m always keen to tell people not to worry about whether or not a company offers Live Streaming as you can always bet via one bookie and watch live via another, but I must admit that it’s handy when a bookmaker’s coverage of events taking place is as good as Betfred’s. As well as obvious things like football, basketball and tennis, Betfred offers coverage of both BAGS and RPGTV tracks when it comes to greyhound racing. Combine that with their In-Play betting and you’ve got a winning combination as far as I’m concerned. You can also Cash Out your bet on some markets, which is a feature I often take advantage of when hoping to avoid a big loss!

As you’d expect from a company that owns The Tote, UK & Irish racing is covered in a big way by Betfred. It’s also not a massive shock that a bookmaker set-up by Manchester United supporters has excellent coverage of football. I’m reluctant to say that you’ll be able to bet on anything you want to via Betfred, mainly because they don’t offer bets on the weird or wonderful. The mainstream is very much their bread and butter, though, so as long as you don’t want to go too far off piste you should be fine. Having said that, winter sports are covered. 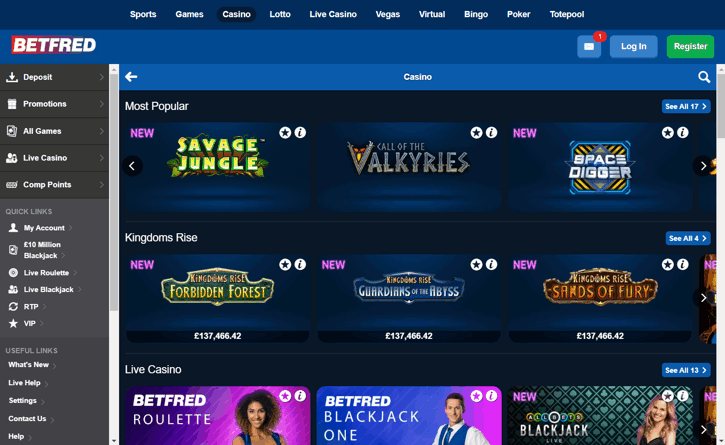 Betfred might have started life simply as a bookmaker, but they have very much branched out as a company since the explosion of the online gambling industry. As well as a sportsbook they also run a casino and a live variation of it, a Vegas themed slot section, bingo, poker and more. Like most of their major competitors, the Dones have made moves to ensure that their site can be a one-stop shop for people who like to have a flutter online.

You can deposit money into your Betfred account in a Betfred shop and the minimum amount required to do that is £10. If you’d rather use a debit card or most of the other systems similar to them then you’re talking about a £5 minimum. The only major exception to that rule is bank transfer, which requires a minimum amount of £85.

You can withdraw funds in a shop as long as you’ve deposit money via a shop too, with £250 being the maximum you can take out unless you give them notice. Generally speaking the minimum withdrawal via other methods is £5 or £25 via bank transfer.

Nowadays there are lots of bookmakers who like to move their operations abroad for tax purposes. Betfred continue to do things the ‘right’ way, having a headquarters in the Birchwood district of Warrington. I heard an anecdote about the company that I think sums up their philosophy: John Haddock joined the company in 1986 and became a regional manager.

He continued to work hard and eventually made progress through the company to become it’s CEO. That gives you a bit of an indication of how they work and how much they value loyalty; something that feeds through into the way that they treat their customers, too. They may be United fans, but they’re alright.