First Posted: 11th August 2017 | Last Updated: 5th October 2022
Offer details correct at time of writing but may have changed since - always check the terms yourself before claiming. T&Cs apply, 18+. Please BeGambleAware.org. For help visit Gamstop.co.uk.
Please note: This promotion has expired and is no longer available

Do you like free money? Of course you do.There’s no guarantee of it with Betway’s 4 To Score competition, but if you get your guesses right then you’ll have a chance to win a piece of the £25,000 jackpot. All you need to do to be victorious is correctly identify which team will score the opening goal of the weekend in the Premier League, the Championship, League One and League Two.

The reason I ask if you like free money is that the competition is free to enter for anyone who has an account with Betway. Whether you’re a brand new customer or someone who has been using the company for years, there’s pretty much no reason why you wouldn’t have a go of a free to enter competition that might see you win thousands.

Every week Betway will give you a selection of matches to choose from from the Premier League and each of the three divisions in the Football League. The matches are the ones that are due to kick off at 3pm on a Saturday, though Betway reserve the right to change this depending on certain factors. The fact that the last day of the season is normally played on a Sunday, for example, might influence their decision of which matches count towards the promotion.

Literally all you need to do is select the team that will score in each of the four divisions of English football. I know that sounds simple, but that’s because it is. Winning might not be as easy, of course, but that’s why it’s a competition! When you click on the 4 To Score page on Betway’s sportsbook you’ll find a list of the four leagues, which will look like this: 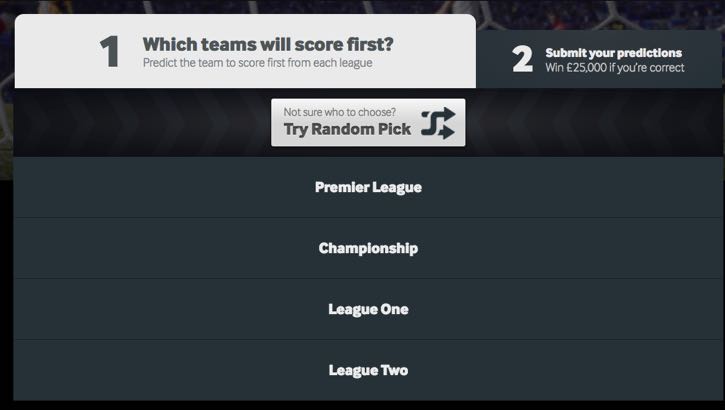 You can choose to allow the computer to make your selections for you automatically if you’d like to, which is a handy tool for those of you that don’t have time to sit and look at the fixtures but still want to take part in the competition. Alternatively, if you know which teams you want to bet on, click on the league and make your selection. It should look like this: 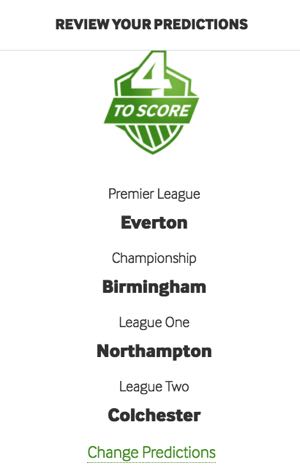 Your selection will be highlighted in Green and that league will close, with the next division in the list opening up. Continue to go through the process, confirming your selections, and when you’re done click ‘Submit’. You’ll then be given a chance to review the choices that you’ve made before confirming. And, there you go. You’re done. As I said before, it really is that simple.

Even ignoring the fact that you’re being a given a chance of winning part of £25,000 for absolutely nothing, you still might want to know if it’s worth it. Now to be fair, which team will score the first goal in all 3pm kick-offs isn’t something that you’re able to bet on as standard with bookies, so you’d have to request a bet or something similar to find that out. If you opted for individual bets on each of the for teams separately or an accumulator, however, here’s what odds you’d get:

It’s probably fair to say, then, that you’re getting very good value for money indeed. No, the bets above don’t include the variable of those teams being the first to score in their division, but that’s probably not adding tens of thousands of pounds of value to the bet if we’re being honest. 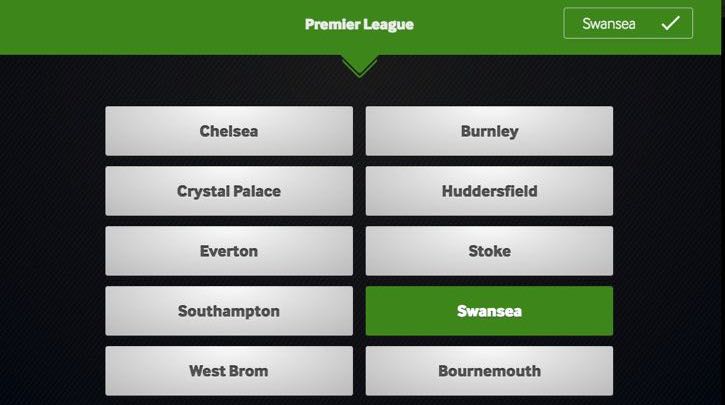 As always with these things, there are numerous bits of information that you might want to bear in mind. You only get one go every week, for example, and you can’t change your selections once you’ve pressed ‘Submit’. This is also about the time the goal is scored within the match, rather than what time it is in the day. That means that if kick-off is delayed in a match then you don’t need to panic.

Say that all of the 3pm kick-offs in the Championship get off on time but traffic problems on the M6 lead the Football Association to delay the kick-off of the Birmingham City match to 3.30pm, don’t worry. If the first goal in all of the other Championship games is scored at 3.07pm, so seven minutes into the match, but the first goal of the Birmingham game is scored at 3.33pm, meaning it was three minutes into that game, then it will be a winner.

Delayed and postponed matches still count as long as they take placed within 48 hours of the original kick-off time. If it isn’t then your selection will shift to the first team alphabetically from that league that’s kicking off at 3pm. The official time of the goal is taken from the BBC’s sports coverage and is down to the minute, rather than the second. If two teams score in the same minute then they’ll both be classed as winners, which is nice.

Now if you happy to make exactly the same selections as someone else entering the competition, which isn’t out of the realms of the possible considering the limited number of options in some instances, then the prize pot will be shared. Speaking of the number of possibilities, what are the odds of your selection being the right one? Strictly speaking, here are the number of options available in each league if all games kicked off at the same time:

Roughly speaking that means you’re looking at 20/1, 24/1, 24/1 and 24/1 for each of the divisions. If those odds were put into an accumulator then you’re looking at a return of over £3 million for a £1 bet. Having said that, the only day of the calendar year that all matches in a league kick-off at the same time is the final day of the season. You might, therefore, want to give that day a miss!

The prize is as easy to understand as the rules of the competition itself. It’s £25,000 each week and if no one wins then it doesn’t roll over. That means you’ll always be going for £25,000 and if someone else wins, you’ll share the pot. Simple!