First Posted: 17th October 2017 | Last Updated: 12th February 2021
Offer details correct at time of writing but may have changed since - always check the terms yourself before claiming. T&Cs apply, 18+. Please BeGambleAware.org. For help visit Gamstop.co.uk.
Please note: This promotion has expired and is no longer available

The whole point of using the services of a bookmaker is to predict the outcome of a given event. Whether you think a certain player is going to score first, a team is going to win or X number of aces will be served, you make your prediction and, in return, you’re offered odds on the likelihood of that happening. The less likely it is to occur, the larger the odds are that you’ll be given by the bookie. You know all of this, of course, so why am I telling you? Well, because everyone likes a long-shot and bookmakers know it, so it’s becoming more and more common for them to have an offer that promotes attempts to win big.

In the case of ComeOn, that offer is their Footcast promotion. It takes the idea of match predictions and gives it a shot of adrenaline, essentially making a massive accumulator with cash prizes at the end of it. The difference is that a normal accumulator will allow you to win some money, but Footcast gives you the chance to pick up an additional £10,000 jackpot. Interestingly, some bookmakers make these sorts of promotions free to enter, but ComeOn have decided not to for those that want to win the cash prize. All you need to is place a qualifying bet, which I’ll explain shortly, but even so I thought I’d let you know up front that you’ll need to invest to win.

As I mentioned in the intro, Footcast is the name that ComeOn have given to this promotion and the best way of thinking about it is that it’s a hyped-up match outcome accumulator. All of the fixtures from the weekend’s Premier League action are laid out for you and you simply need to decide whether you think each one will be a home win, a draw or an away win. If you get nine predictions correct you’ll win a share of £1000, if you get ten right you’ll get part of £1,500 and if you correctly guess ten of your predictions and answer the jackpot question then you’ll win a share of £10,000.

As always with such promotions, the share of the amount you’ll win will depend entirely on how many other people get the same things right as you. Obviously this can significantly impact the amount of money you walk away with, given that £10,000 shared between two, for example, is a nice little shot in the arm, but shared between twenty is a bit of a disappointment! You can attempt to increase your chance of winning by picking more random results, but ultimately you’ll only be aided and abetted in that sense if the Premier League matches finish equally as randomly.

Is It the Same as a Standard Match Result Accumulator?

A standard accumulator based on the results of matches asks you to predict who will win or if the game will end in a draw. You can, if you wish to, hedge your bet by adding more than one outcome to your betting slip, but this will result in your possible winnings being reduced accordingly. ComeOn have recognised that games, especially in the Premier League, aren’t all that predictable. They’ve therefore decided to add in the ability to hedge your bet without it affecting the amount of money you stand to win if you’re right. You get not one, not two but three double-chance selection that you need to add in to your predictions, which break down as follows:

This makes it more likely that there will be winners, thanks to the ability to have more than one guess on the outcome of three different matches. On the flip side, it also increases the number of correct guesses that other people can make and therefore reduces the possibility that you win the prize outright.

What Is a ‘Qualifying Bet’?

You can play Footcast for fun if you’d like to, but that strikes me as being slightly pointless. Instead you’ll want to make sure that you’re eligible to win the cash prize and in order to do that you’ll need to place a qualifying bet. Thankfully that’s not too hard, with ComeOn outlining specific criteria that need to be met in order to do so. Your bet needs to: 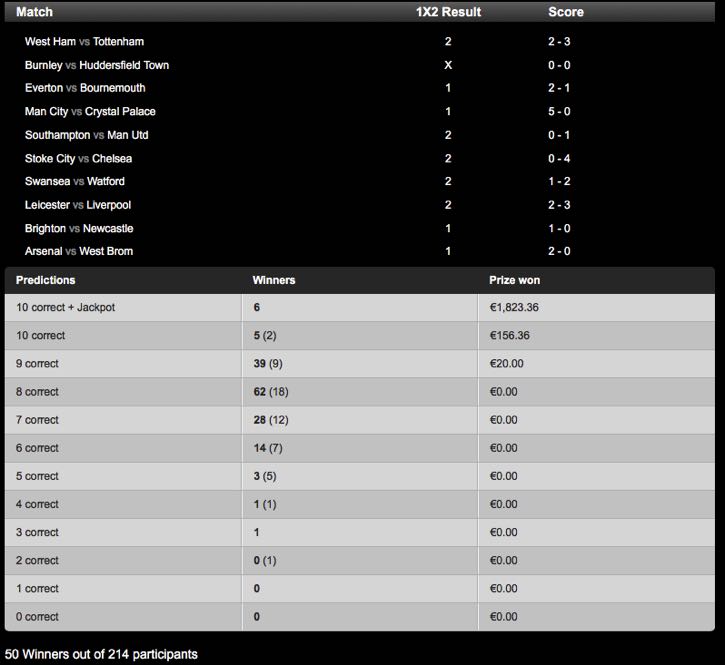 There are two main things I thought were worth drawing to your attention in addition to all of the above. The first is that anyone who wins the jackpot will receive their winnings in instalments of £2000 until all winnings have been paid. Say you and someone else split the jackpot and will be receiving £5000 each, you’ll receive two payments of £2000 over two months then a third payment of £1000 to round the amount off.

The second thing you’ll want to know is that it is possible to edit your Footcast up until the moment the first match kicks-off. All you need to do is head to ‘My Footcast’ on the ComeOn website and then find your predictions for that week. You’ll see an ‘Edit your Footcast’ link and that’s the one to click on.

The key question for any such promotions is whether or not it’s worth your while to do it. I experimented by doing a match result acca on all Premier League matches over the course of a weekend and if all my predictions had been correct I would have won £5733.97, which is significantly more than a share of the £1500 I’d have won from Footcast. That, said, it’s also about half of the amount I’d have won if I’d hit the £10,000 jackpot on my own with the Footcast offer.

In terms of how often the prize is won, here’s what I discovered from the first seven weeks of the Premier League campaign in 2017-2018:

As you can see, according to the information available on the ComeOn website, there was only one winning week out of the first seven. In that instance the players that correctly guesses nine results won £20 each, those that managed ten picked up £156.36 and those that won the jackpot were rewarded with £1823.36. There was also one week when a user won £1000 outright for being the only person to manage nine correct predictions.

On the one hand this suggests that it’s a tricky thing to win, but on the other it means that the chance you could do so is increased. If you’re going to place a match result bet that would qualify you for the cash prizes anyway then I see no reason why you wouldn’t also want to enter the Footcast competition in the hopes of coming away £10,000 richer.